As I already said in last year’s retrospective, I want to write a bit about NWScript and its bytecode.

First of all, what is NWScript? NWScript is the scripting language and system BioWare introduced with Neverwinter Nights and used, with improvements and changes, throughout the Aurora-based games. Specifically, you can find NWScript driving the high-level game logic of Neverwinter Nights, Neverwinter Nights 2, Knights of the Old Republic, Knights of the Old Republic II, Jade Empire, The Witcher (in combination with Lua), Dragon Age: Origins and Dragon Age II. This is nearly every single game xoreos targets. The only exception is the Nintendo DS game, Sonic Chronicles: The Dark Brotherhood, which doesn’t seem to use any scripts at all.

NWScript is written in a C-like language and saved with the .nss extension. A compiler then translates it into a stack-based bytecode with the .ncs extension, which is what the game executes. That is similar to how ActionScript in Flash videos works, and how Java, Lua and other scripting languages can operate.

Like C, NWScript is a strongly typed language: each variable has one definite type. Among the available types are “int” (32-bit signed integer), “float” (32-bit IEEE floating point), “string” (a textual ASCII string) and “object” (an object in the game world, like an NPC or a chest). Moreover, there are several engine types, like “event” and “effect”, though which of these are available depends on the game. There are also structs, but in the compiled bytecode, they vanish and are replaced by a collection of loose variables. Likewise, the “vector” type is treated as three single float variables. A special type is the “action” type, a script state (or functor) that’s stored separately.

Additionally, Dragon Age: Origins adds a “resource” type (which, in the bytecode, can be used interchangeably with the “string” type) and dynamic arrays. Dragon Age II in turn adds the concept of a reference to a variable to help performance in several use-cases. For these new features, these two games each add two new bytecode opcodes, something not done for any of the other post-Neverwinter Nights games.

To get and modify the state of the game world, like searching for objects and moving them, and for complex mathematical operations like trigonometry functions, the NWScript bytecode can call so-called engine functions. These are functions that are provided by the game itself; about 850 per game, with some overlap. They’re declared in the nwscript.nss file (nwscriptdefn.nss for The Witcher and script.ldf for the Dragon Age games) of each game.

The original Neverwinter Nights toolset came with a compiler, but a part of the modding community, the OpenKnights Consortium, created their own, free software compiler, nwnnsscomp. Unfortunately, it has a few disadvantages. For example, it always needs the nwscript.nss file and it also only handles Neverwinter Nights. And while there has been several variations that have been extended to handle newer games, many of these are only available as Windows binaries. As far as I’m aware, there never has been a variation that handles Dragon Age: Origins or Dragon Age II. Also, since the code hasn’t been touched for 10 years, it’s difficult to compile now, and it doesn’t work when compiled for 64-bit. For what it’s worth, I mirrored the old OpenKnights NWNTools, with a few changes, to GitHub here.

This nwnnsscomp also has a disassembly mode, which can convert the compiled bytecode into somewhat human-readable assembly. This is pretty useful! I wanted my own disassembler in xoreos-tools.

The steps to disassemble NWScript bytecode are the following:

Read the .ncs file, instruction for instruction. An instruction consists of an opcode (like ADD for addition), the argument types (which are taken from or pushed onto the stack) and any direct arguments. For example, an addition that operates on two integers would be known as ADDII. The instructions are stored in a list, one after the other.

Group the blocks into subroutines. A subroutine is a sequence of blocks that gets jumped to by a special opcode, JSR, and returns to the place from where it has been called with RETN. (In many programming languages, for example C, these are also called functions, but we’re calling them subroutines so that they’re not being confused with engine functions. Subroutine is also often the usual term in assembly dialects.)

Record where a subroutine calls another and link the caller and callee, so that a call graph could be created easily. Likewise, the instructions that start and end the subroutine are also separately recorded.

There are three special subroutines that we can identify:

This step goes through the whole script and evaluates each instruction for how it manipulates the stack. Since stack elements are explicitly typed, and instructions that create new stack elements know which type they create (either explicitly, or implicitly by copying an already typed element), both the size of the stack and the type of all elements can be figured out. At the end, each instruction will know how the stack looks before its execution. And for each subroutine, we then know its signature: how many parameters it takes, what their types are and what the subroutine returns.

However, this step only works if we know which game this script is from, because we need to know the signatures of the engine functions. And, unfortunately, this step fails when the script subroutines call each other recursively. The stack of a recursing script can’t be analyzed like this.

So far, the script disassembly consists of blocks that jump to each other, with no further meaning attached. To extract this deeper meaning, we analyze the control flow for higher-level control structures: do-while loops, while loops, if and if-else blocks, together with break and continue statements and early subroutine returns. Each block gets a list of designators that show if and how it contributes to such a control structure.

Finally, we create an output. This can be one of three:

As an example, here’s a script from Neverwinter Nights 2: this is the original source, and this is the full listing output, the assembly-only output and the control flow graph.

During this work, I have found a few interesting little bugs in the original BioWare NWScript compiler. For example, this little script, hf_c_skill_value.nss in Neverwinter Nights 2 and its disassembly:

Specifically, the int nSkill = GetSkillRank(nSkill, oPC); line is compiled wrong. First, an instruction with the opcode RSADDI is generated, which creates a new integer variable on the stack, for nSkill. Then, the arguments for GetSkillRank are pushed onto the stack, and GetSkillRank is called using the ACTION instruction.

Unfortunately, as soon as the compiler creates the stack space for the local variable nSkill, it associates nSkill with this local variable. So when it’s time to push the parameter nSkill for GetSkillRank on the stack, the parameter to the outer StartingConditional subroutine has already been overruled, and the CPTOPSP points to the new local variable.

This renders the nSkill parameter unused and useless, and GetSkillRank is potentially called with an uninitialized value.

For another example, have a look at this script from Neverwinter Nights:

It’s meant to check whether the player character is a druid. Since you can multi-class in Neverwinter Nights, it checks whether the character is a druid for the first class, for the second class and then the third class. If any of these return true, iResult will be set to true. To achieve this, a boolean disjunction (“or” operation) is used. As is customary in C-like languages, the boolean disjunction in NWScript is supposed to support short-circuiting: if the first part is already true, the second (and third) checks aren’t even called. 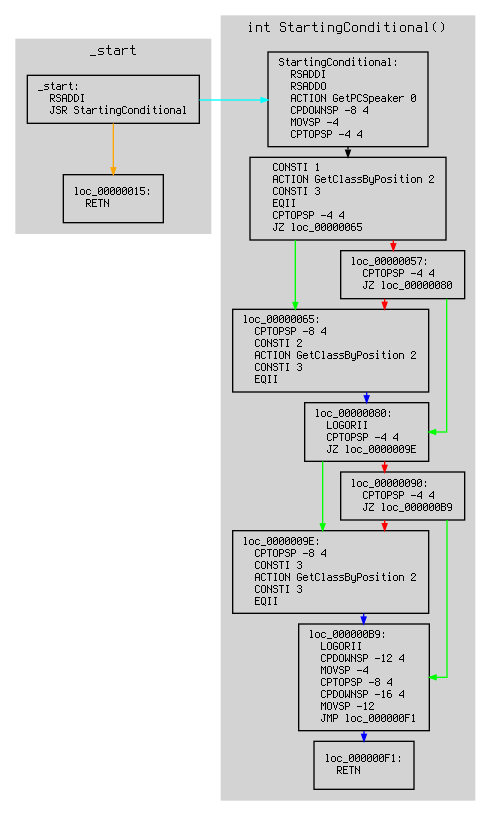 The first EQII is the first comparison, and then the block in loc_00000057 is supposed to do the short-circuiting. It duplicates the top-most stack element with a CPTOPSP -4 4 before bypassing the second comparison and jumping to the LOGORII that does the boolean disjunction. Unfortunately, instead of directly jumping to loc_00000080 with a JMP, a JZ was generated instead. And since the top-most stack element was already duplicated and checked with the previous JZ, we know that the true-edge is never taken. It is a dead edge.

This has an interesting consequence. The short-circuiting for the boolean disjunction is broken: all parts are always evaluated before the results are or’ed together. In practice, this doesn’t matter much. It makes the code a bit slower, and any side effects will always happen.

Additionally, if the true edge were ever taken, the stack would be in a broken state. Unlike JMP, JZ consumes a stack element, and so the LOGORII would be missing one of its arguments. Because this is not possible, it doesn’t matter for execution, but my stack analysis dies there. To combat this problem, I added an extra disassembly step after the block generation, the detection of these dead edges. To keep it simple, I only do some simple pattern matching, which is enough for most scripts. There are a few cases where it fails, though.

This bug is also not present in the OpenKnights compiler: 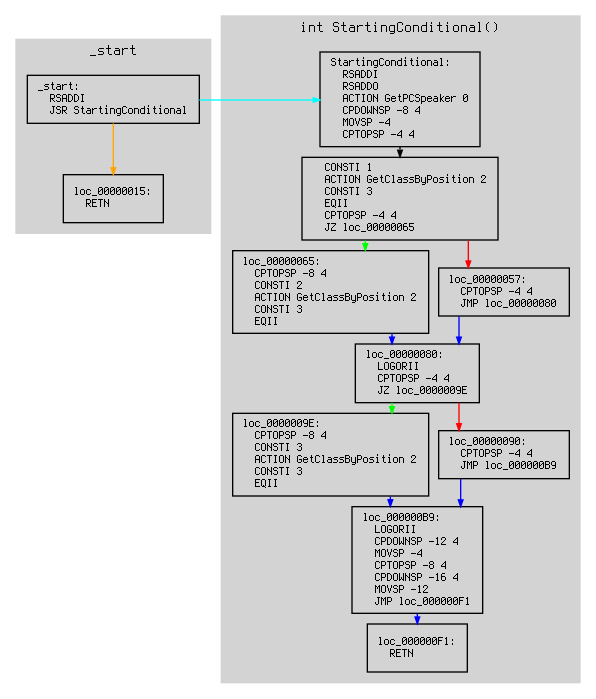 So, to recap, xoreos-tools now has a tool that can disassemble NWScript bytecode, similar to the disassemble mode of the OpenKnights nwnnsscomp, with these added features:

If you’re interested, the source is available here. Binaries will come with the next release of xoreos and xoreos-tools.

There is, however, still a lot left to do there:

Unlike nwnnsscomp, xoreos-tools is still missing a compiler as well. This is something that would be very nice to have indeed. An assembler, which can take the disassembly output and create a working .ncs file out of it would probably be a useful first step in that direction.